Tom Spencer traveled to Otisfield, Maine to deliver a $10,000 grant

Tom Spencer traveled to Otisfield, Maine to deliver a $10,000 grant to the Seeds of Peace International Camp

On July 3rd 2013, Tom Spencer of Spencer Financial, LLC in Sudbury traveled to Otisfield, Maine to deliver a $10,000 grant to the Seeds of Peace International Camp.  Spencer was able to procure the grant through his involvement with the Million Dollar Round Table Foundation under their Worldwide Grant Program.

Tucked away in the woods of Maine, Seeds of Peace brings in teenagers from groups in conflict around the world.  These "Seeds" go through a transformative experience of humanizing "the enemy."  Because of the impact that individuals with vision can have on world history, it is hoped that graduates from Seeds of Peace can literally change the world.

In Spencer's grant application, he asked the Foundation to imagine a network of young Israeli and Arab professionals, leaders at both community and national levels, who represent their societies authentically and genuinely and yet are connected through personal ties to their former adversaries.  This network of leaders would ultimately pursue key public and private sector careers with the capacity to forge professional cross-border relationships in education, business, tourism, science and journalism.  This is the goal of Seeds of Peace, and it is being realized every day.  The MDRT Foundation has historically made most of its grants to US organizations.  Spencer made the case that Seeds of Peace presents a unique opportunity to make a grant with truly international implications.  He argued that nothing could be more significant than a bold contribution toward world peace.  A Seed that the foundation sends to camp today could be tomorrow's visionary world leader.  That same teenager, never given the opportunity, could help to perpetuate violence and conflict.

A Palestinian Seed recently stated, "the only enemy to face is our own manipulated and misdirected minds that can define an ordinary human being that we never met before as an enemy."  By bringing together teenagers raised as enemies and allowing them to experience each other as human beings, Seeds of Peace offers a glimpse of what the future can be.

This was Spencer's fourth visit to deliver grants to the Camp.  The Seeds in camp included Egyptians, Afghans, Palestinians and Israelis, Indians and Pakistanis as well as Americans.  Spencer was able to address the Seeds in an all-camp meeting.  In his comments, he reinforced their significance as instruments of positive change in the world.

While the camp is provided with 24 hour state police security, Seeds engage in typical camp activities, teambuilding exercises or simply sitting in groups on the lawn discovering what they have in common.  The camp provides a carefully orchestrated process of overcoming hatred.  Spencer comments that the world needs Seeds of Peace and he is pleased to provide his support.

The Million Dollar Round Table is an international organization of more than 38,000 financial services professionals representing more than 70 countries around the world.  The MDRT Foundation makes grants to recipients where their members have shown significant involvement. 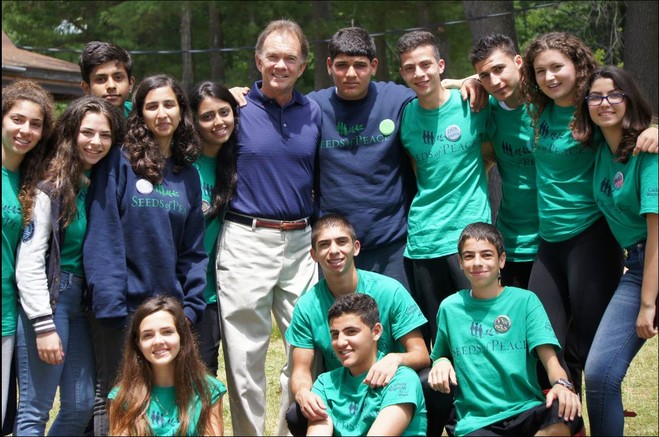 Find out more about us

Don't hesitate to get in touch with us.
We would love the opportunity to become your trusted advisor.

This communication is strictly intended for individuals residing in the states of AZ, CA, CO, CT, DC, FL, IL, KY, LA, MA, MD, ME, MI, MN, NC, NH, NJ, NV, NY, OK, OR, PA, RI, SC, TN, TX, VA, VT, WI. No offers may be made or accepted from any resident outside the specific state(s) referenced.

Qualifying membership in the MDRT is based on minimum commission and gross business generated within a year and is not based upon performance or returns experienced by any client, or opinions of the advisor's clients or former clients.

Third-party rankings and recognitions are no guarantee of future investment success and do not ensure that a client or prospective client will experience a higher level of performance or results. These ratings should not be construed as an endorsement of the advisor by any client nor are they representative of any one client's evaluation.

PLEASE NOTE: The information being provided is strictly as a courtesy. When you link to any of the web sites provided here, you are leaving this web site. We make no representation as to the completeness or accuracy of information provided at these web sites.